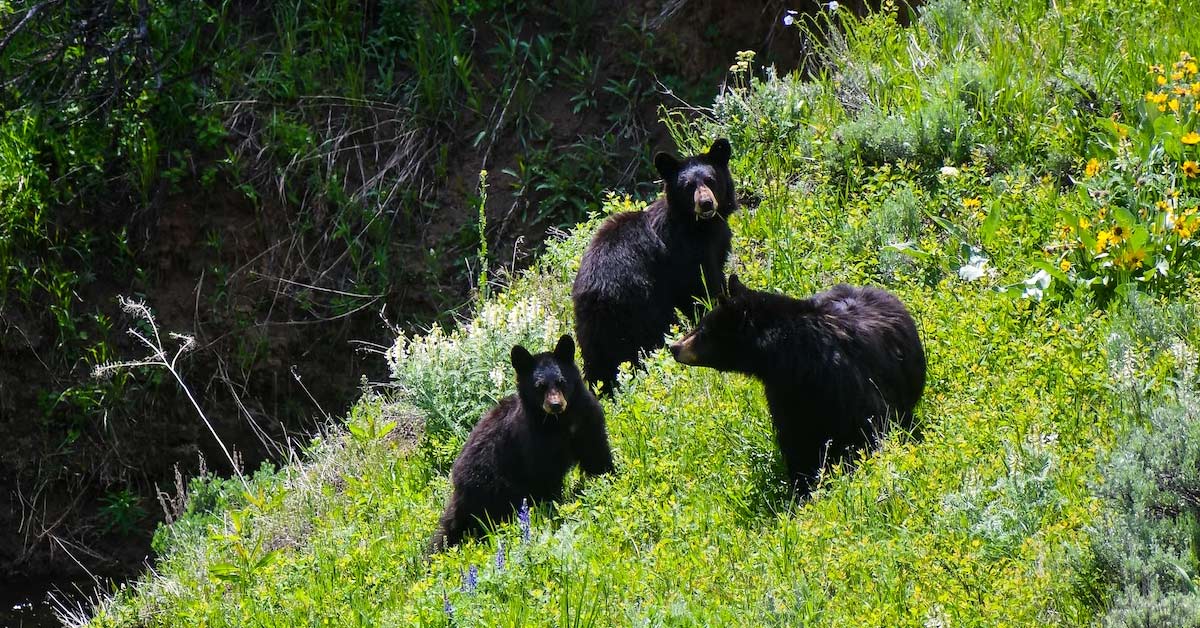 Spotting animals in their natural habitat is one of the most exciting things that can happen during a trip to Yosemite National Park.

Whether you’re chasing the perfect wildlife picture, or it’s your dream to observe a Sierra Nevada Mule Deer in the wild, keep reading.

In this guide, you’ll learn how everything you need to know on how to maximize your chances at an animal encounter, and how to meet the Yosemite wildlife in complete safety.

What Animals Live at Yosemite National Park? 5 most famous Mammals at Yosemite:

1. Black Bear – The King of Animals at Yosemite 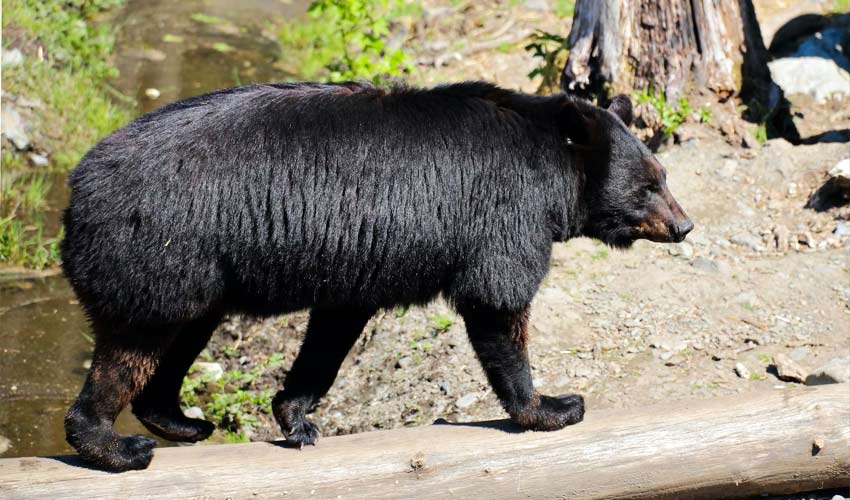 The Black Bear is one of the visitors’ unparalleled favorites of Yosemite Park.

The animal is not easy to spot around the park, as black bears are notoriously shy animals that tend to avoid people.

However, if it’s your dream to see a black bear, Yosemite is the perfect place, as there are almost 500 examples of black bears living within the park.

A fun fact about black bears? Most of them are not black at all. In reality, you are more likely to encounter a black bear whose fur is brown or even reddish color.

Black bears are strong and can be dangerous to people if provoked, but they are not predators of other mammals. They mostly rely on acorns and seasonal foraging to survive, and just occasionally will eat small animals like ants, larvas, and other insects. 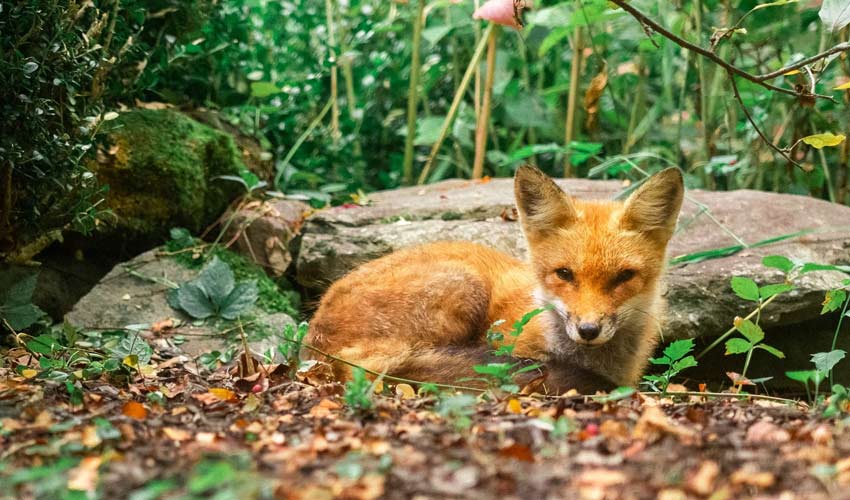 The super elusive Sierra Nevada Red Fox is one of the most impressive inhabitants of Yosemite, but you’re not likely to spot one.

They have managed to avoid getting spotted for over a century, and they are only routinely “caught” by hidden wildlife cameras.

The Sierra Nevada Red Fox is an agile and smart predator, that targets mostly small rodents.

Their thick coat allows them to live at high altitudes and manage comfortably at the lowest temperatures, well hidden in the snow. 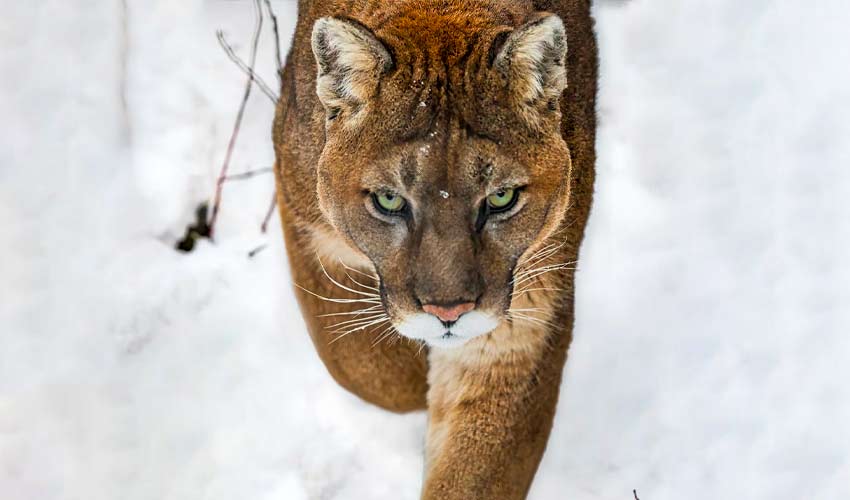 Mountain Lions have been inhabiting Yosemite park and the surrounding natural areas forever, and have suffered greatly in the past because of overhunting.

The mountain lions are predators, and because of their amazing physical abilities, they were believed to be a great danger to people and therefore were hunted recklessly in all of California.

More recent studies have proved that mountain lions are not a real menace to visitors of the park, as it is not their instinct to get close or attack humans.

Spotting a mountain lion is rare but is entirely possible at Yosemite, as their population number has been growing. 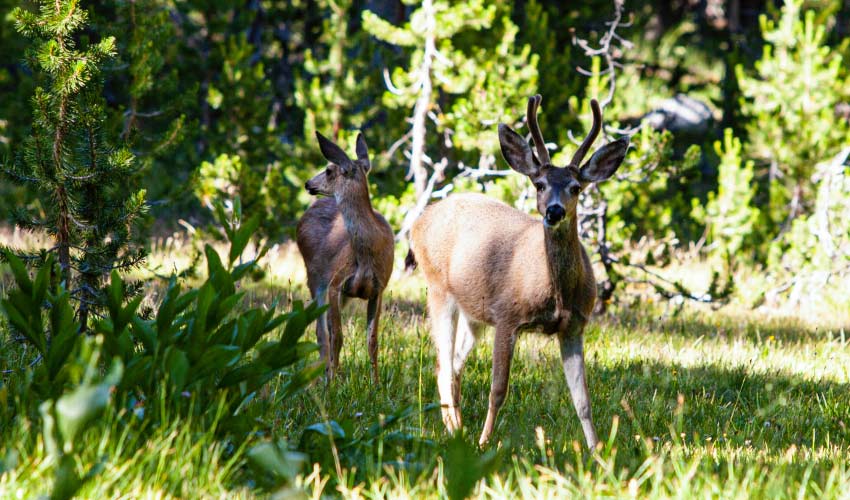 The Mule Deers that roam around Yosemite Park are the easiest animal to spot on a hike.

It is common for backpackers to catch sight of a mule deer on and along the trails surrounding Yosemite Valley, especially during the summer and fall months, when the animals are more active.

Although mountain lions are natural predators of the mule deer, the deer remain among the park’s most numerous species.

The mule deers are strictly herbivores as they mostly feed on grass, acorns, and wild berries, however, it is possible that they attack people if they perceive a threat.

Since a grown deer’s average weight can reach a staggering 400 pounds, it is important to admire this animal from a distance and not engage directly to avoid a confrontation. 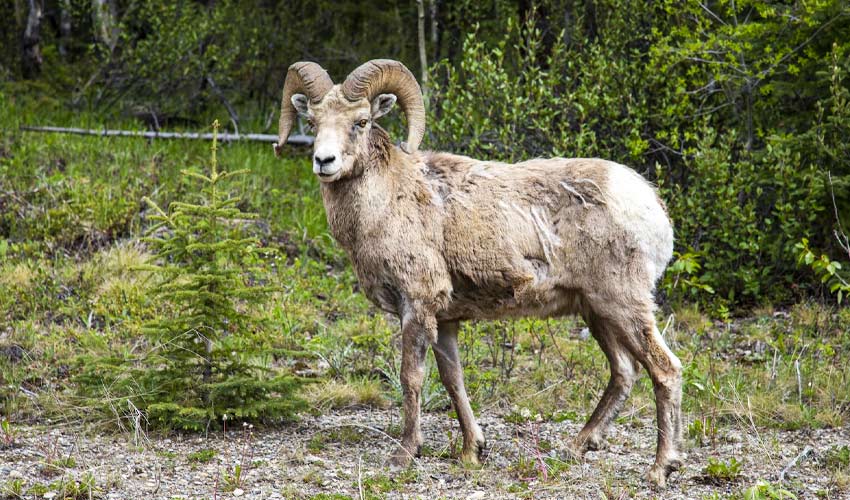 The Sierra Nevada Bighorn Sheep is a symbol of Yosemite Park, and one of its most delicate species.
The bighorn sheep have been on the verge of extinction for decades now, and are only recently stabilizing in number after facing many different threats.

From climate change destroying their habitat and forcing them to emigrate to higher altitudes, to having to adapt to new diseases, the bighorn sheep have been through a lot.

One of the latest attempts at saving the species has been fairly successful and a few natural births luckily took place in the last years.

The bighorn sheep is an alpine mountain animal, so in order to spot one, you’ll have to climb quite a bit. But if you can handle the altitude, you may be rewarded with an amazing encounter.

The best way to spot wildlife is to go where the animals are, so here are a few trails at Yosemite that are completely immersed in nature and border on the animals’ living environment. 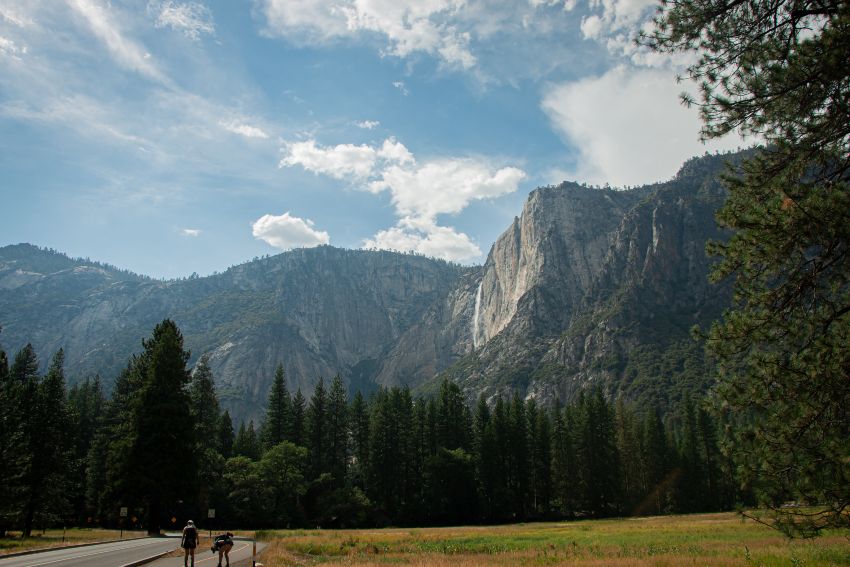 The trail winds within the natural habitat of many local species, and for this reason dogs and in general pets are not allowed on the path.

This is an extremely challenging hike, both because of the length (around 8 miles) and terrain conditions.
The trail is well signaled and evident, however, it is very steep and at times slippery, muddy, and even frozen.

I recommend you go for it only if you feel confident in your hiking abilities and endurance.

The trailhead can be easily reached from Sunnyside Campground through a short shuttle ride and a 5-minute walk.
Eventually, the path will lead you to the fantastic Yosemite Falls Overlook, where you’ll witness one of the best views of the National Park. 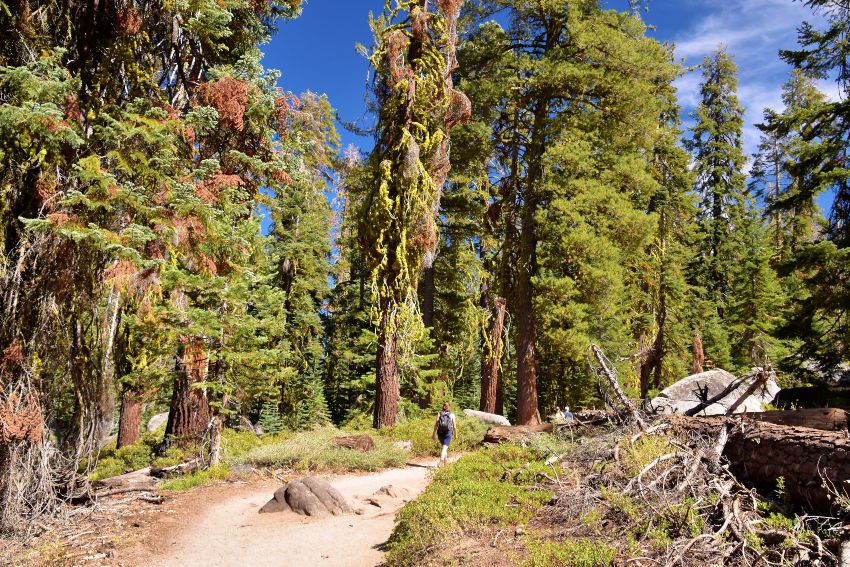 Whether you’re an expert hiker or not, Sentinel Dome Trail will likely earn a spot in your heart.
Because of the high altitude, it is a great place to see local wildlife whose habitats are elevated.
The trailhead is located at Glacier Point at around 7.500 feet, so to reach Sentinel Dome you’ll need to climb around 500 feet.

The short hike (about 1.5 hours walk) is moderate and the trail is not considered very arduous.

Nonetheless, the 360 views, once you’ve reached Sentinel Dome, are bound to leave you speechless.

Consider the weather and your resistance to altitudes when planning a trip to Sentinel Dome. 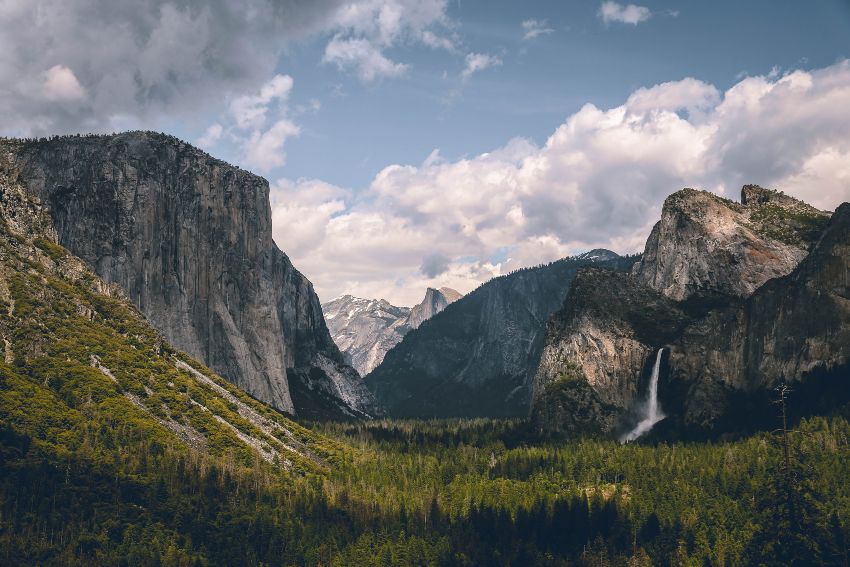 From the trailhead, the path follows the course of Merced River for a while, passing then a couple of waterfalls (Illilouete Fall and Vernal Fall) before reaching Footbridge.

From Vernal Fall, the so-called Misty Trail will lead you to the gorgeous Emerald Pool.

As you may notice, this whole first part of the trail already covers many different habitats and includes several ecosystems, making it easier to spot a wide array of wildlife.

Finally, you’ll reach Nevada Falls, from where you’ll be able to loop back following the John Muir Trail.

3 Tips for Viewing Animals at Yosemite 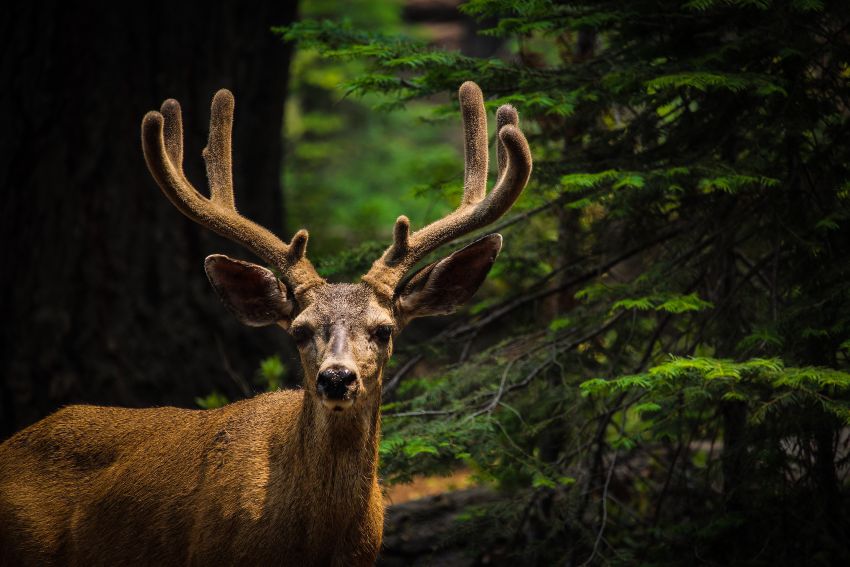 RELATED 20 of the Most Remarkable American Mansions 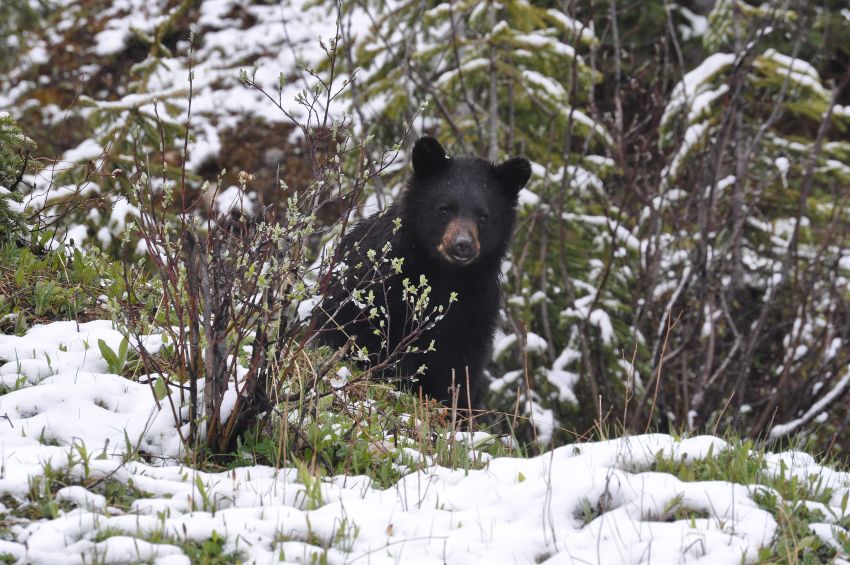 One thing that sounds fake but it’s actually true is that black bears are as scared of you as you are of them.

How to act in front of a Mountain Lion

RELATED 6 Waterfalls Near Kansas City Worth Checking Out

Read More and Choose your Next Travel Destination

Are you still looking for the perfect destination? Have your pick from my favorite 20 locations for a weekend getaway in the US.

If a relaxing (but adventurous) holiday sounds like just what you need, have you ever considered the hot springs of California?

Nashville to DC Road trip: 16 Stops Along the Way 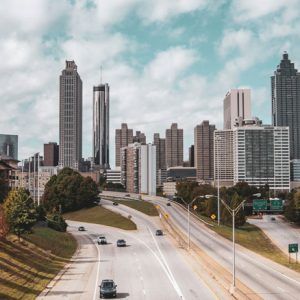 The 22 Best Things To Do In Atlanta 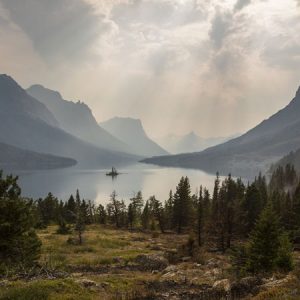 Things to Do in Montana: Guide to New and Old Montana Attractions