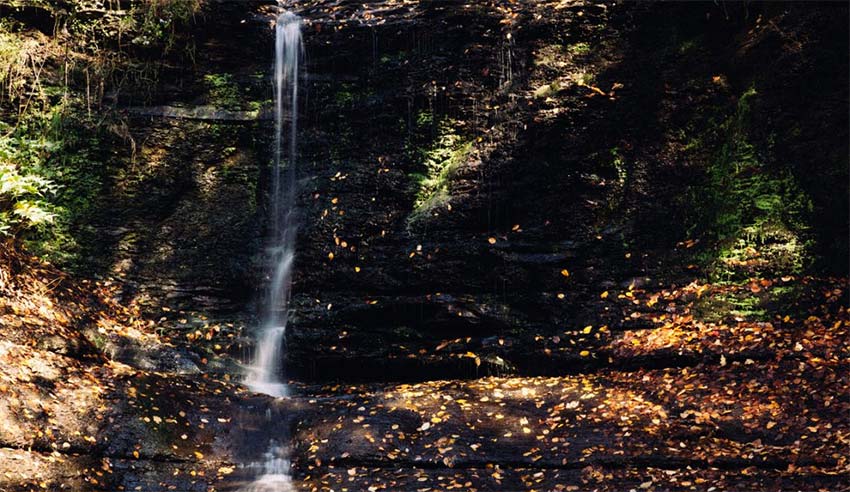 Fall Run Park has got to be one of Pittsburgh’s most “hidden gem” hikes.

When you think about a day hike to a waterfall you are probably picturing yourself on an island vacation.  Or at least somewhere more exotic than Pittsburgh.  I know Hawaii is the first thing that comes to my mind when I picture waterfalls.

I grew up in Pittsburgh and had never heard of Fall Run Park until a few years ago.

The first time I went to the park I was amazed by the secluded natural beauty of the park, the stream, and of course the waterfall.

And the best part?

It’s only a 20 minute drive from downtown Pittsburgh.

Fall Run Park is in Shaler Township and is very easy to get to.

However, if you put that into Google maps, you’ll actually drive past the entrance to the park.

The easiest way to get there is to head north on Route 8 away from the city and turn right onto Fall Run Road across from the Three Rivers Harley Davidson store.  Turn left when you see the park entrance sign.

Drive past the playground and soccer field.

There is a small parking area before the turnaround at the end of the road.  I’ve never had any trouble finding parking, the park isn’t usually very crowded.

There is an additional parking lot back near the soccer fields if the lot happens to be full.

The Hike Through Fall Run Park

Your hike starts on the path to the right of this park sign: 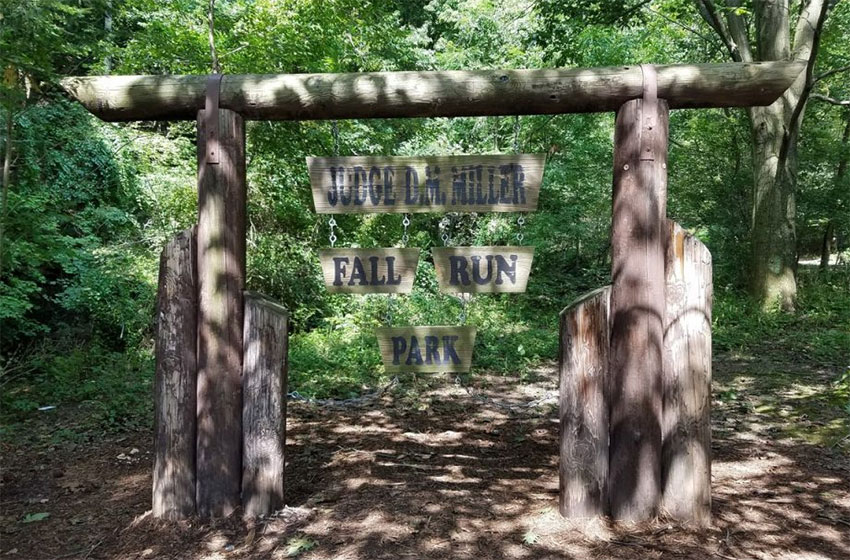 The hike is about a half mile to the waterfall and about 0.8 miles (each way) to walk the full path. 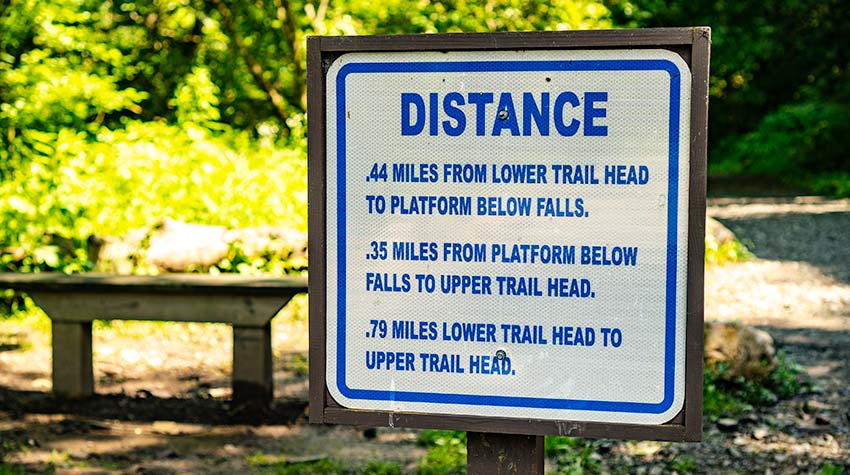 A lot has changed since I first wrote about Fall Run Park.

For one thing, I now have a two year old who could literally spend all day asking if we can “go hiking?” and “throw rocks?!”.

But more specifically about Fall Run Park, they have made some major improvements to the hiking path. In 2015, a storm damaged significant parts of the trail, and even washed some of the pedestrian bridges down stream.

As of 2017, Fall Run Park received one million dollars in renovations and has been completely restored.

The bridges that weave across the stream and the wooden stairs by the waterfall have all been replaced and are much nicer and more sturdy now.

I had read before that you could continue hiking above the waterfall, but the path was so overgrown I had never bothered to do so.

Well that’s not the case anymore. Now I’d consider the waterfall to be about the halfway point on your hike. 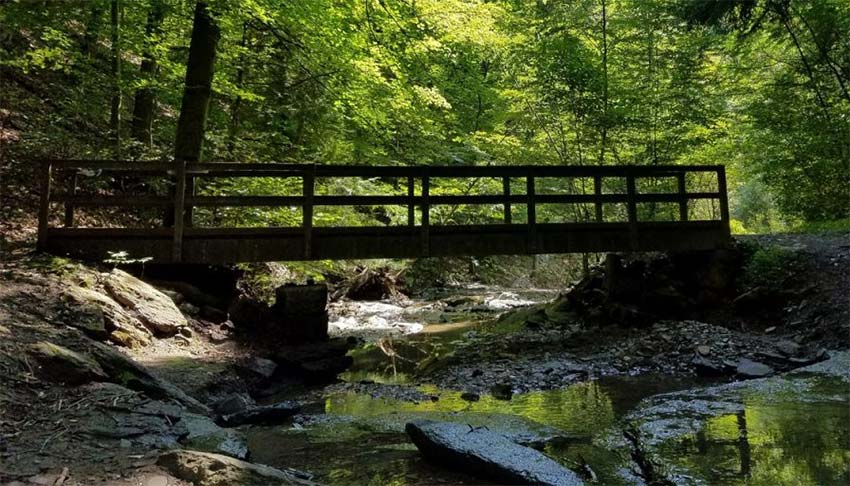 How difficult is the Fall Run Park hike?

This hike is perfect for any one of all ages, including novices and families with young children.

There is a clear path that weaves back and forth across the stream over picturesque wooden bridges.

Note for families:  Although the path itself would probably be traversable with a stroller, it would be difficult to constantly lift the stroller onto and off of the bridges.  Additionally, there is a stairway to the top of the waterfall at the end of the path.  I’d highly recommend leaving strollers in the car and opting for a baby bjorn to carry any children that are too small to walk.

Pro tip: We like to collect small rocks as we hike and then stop on the bridges and throw them into the water. 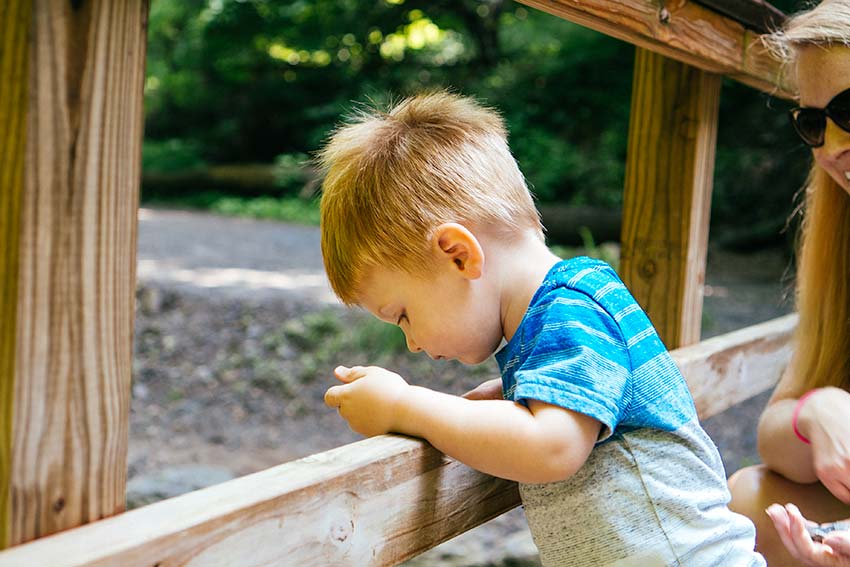 When the stream is small and the water is calm, another option is to walk along the riverbed. I’ve been to the park many times and never seen the water flowing much harder than in these pictures. 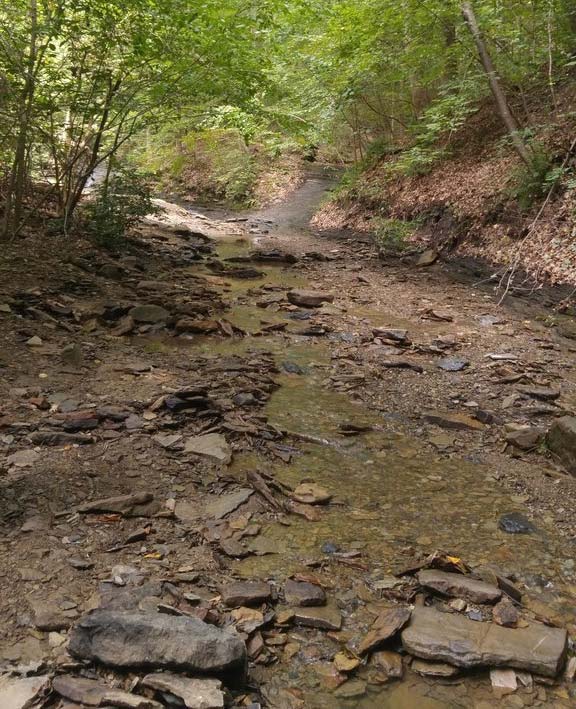 The water pools in some areas deep enough to hear a good KERPLUNK! if you throw a rock into it or for a dog to splash around, but I’ve never seen water here that is deep or fast moving enough to worry about being swept away.  Of course always use common sense in nature.

If the water looks dangerous then stay on the path.

About two-tenths of a mile into the hike, you’ll come across a short, but steep hill.

Follow the small detour path to the right and you’ll come across your first two waterfalls. 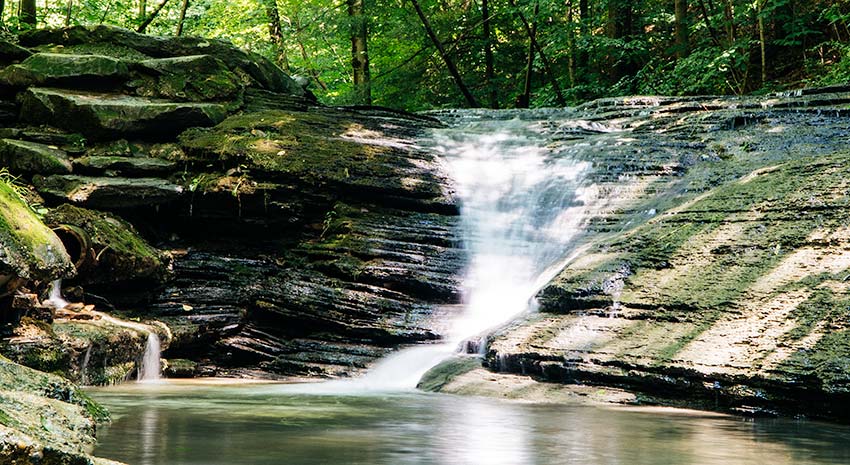 This isn’t the main attraction, but it’s easily missed.

Double back and continue along the path.

Keep your eyes open along the way for some of the beautiful wildflowers. 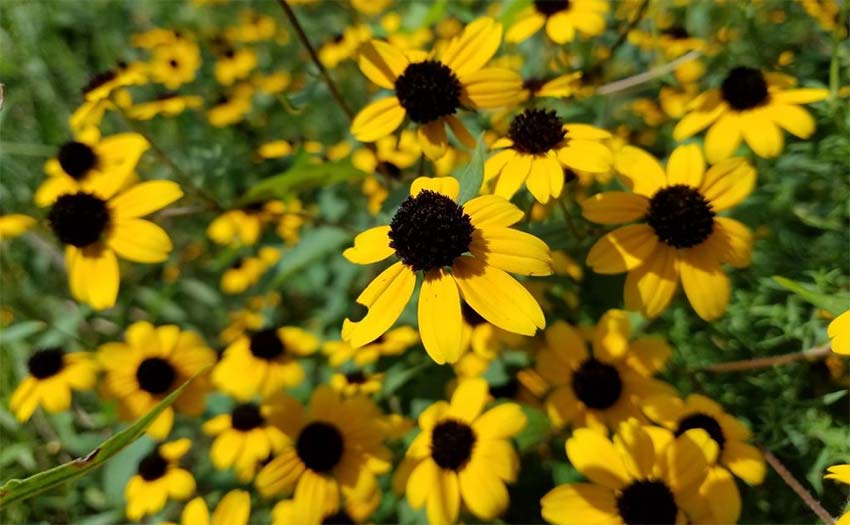 Before you know it you’ll see the path leading to a giant wooden bridge and stairway. 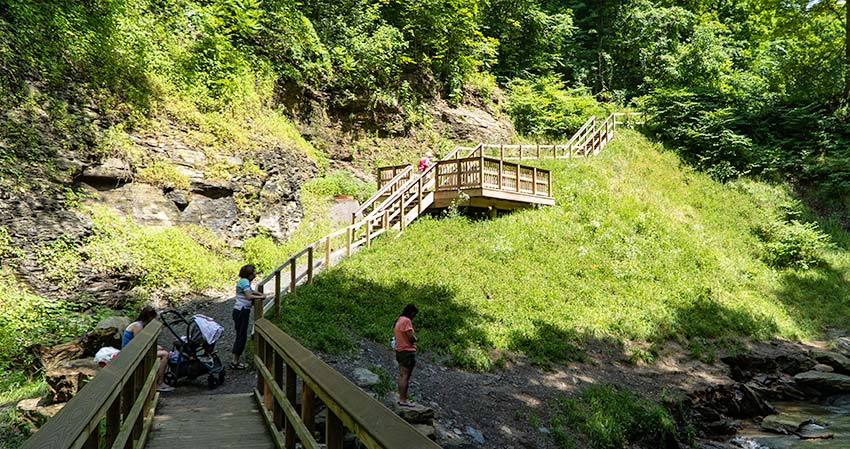 This is the part of the path that you’ve been waiting for. Just about a half mile from the start of the trail is a beautiful view of the waterfall. 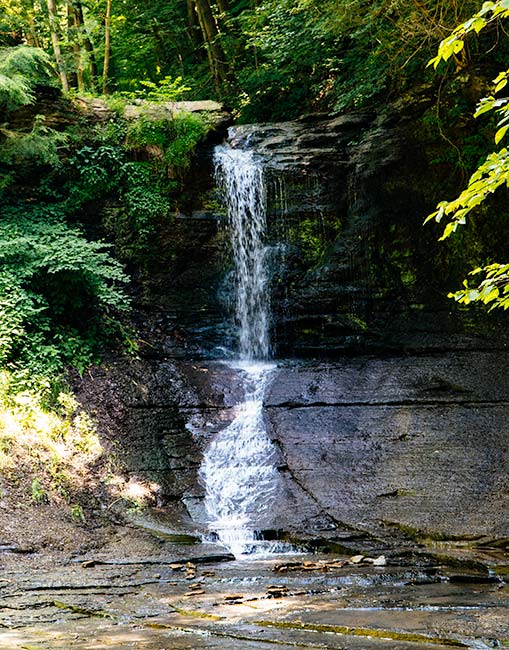 The water tumbles half way down through the air before hitting a slanted portion of the rock wall. There are often families climbing up the wall and using the bottom half of the waterfall as a slide.

Once you get past the waterfall there’s still plenty of chances to walk along the stream, throw rocks, dig in the rocks for bugs, or to use the rocks to try to dam up the stream and change the flow of water. 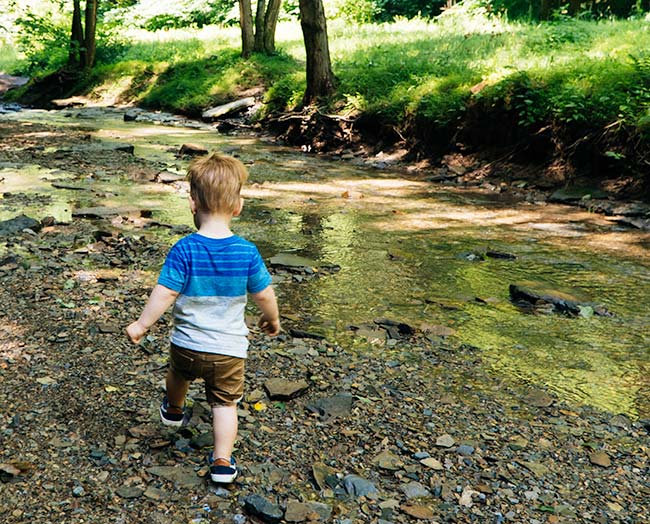 If you are looking for a quick escape from the city then you could easily walk to the falls and back within an hour or two.

However, if you are looking for a nice way to spend the day, bring a bathing suit, some towels, a camera, and a picnic lunch.

The Hike in the Fall

If you get the chance to visit the park during the Autumn months, go!

The leaves provide absolutely gorgeous backdrops and line the stream with incredible colors.

Here are a few last pictures of the park from a previous trip in the fall when the leaves were changing colors. 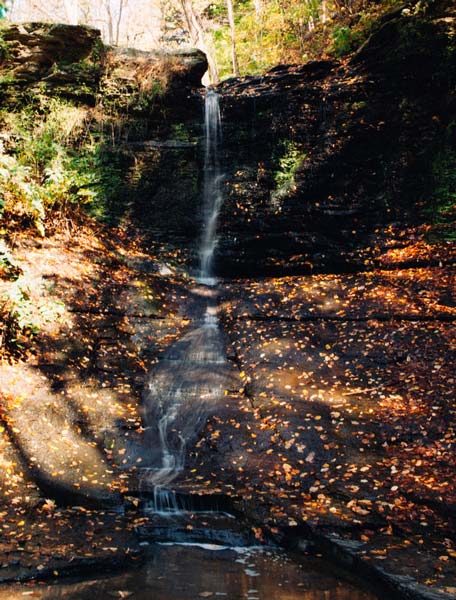 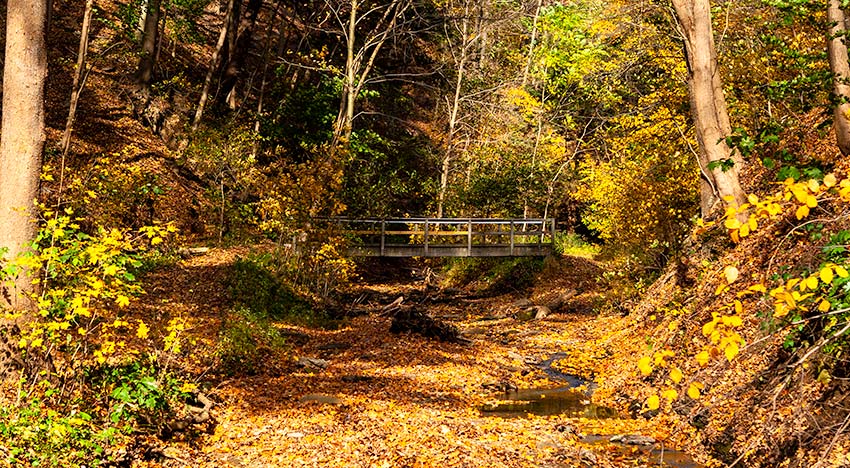 I haven’t yet visited in the winter, but I can imagine the snow makes it even more picturesque.

RELATED 10 Best Botanical Gardens in the US to Visit

Have you been to Fall Run Park?

You would never expect the beauty of an East Coast National Park so close to a major city. It really is one of Pittsburgh’s most hidden gems.

Have you been to Fall Run Park? What did you think?

Do you know of any other secluded parks or waterfalls in the Pittsburgh area that I should check out?

8 Zoos with Penguins that You Have to Visit 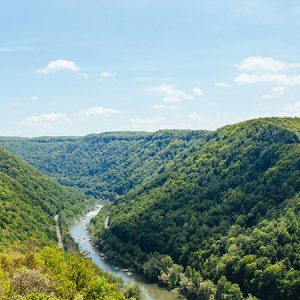 20 Best Things to Do in West Virginia for All Ages 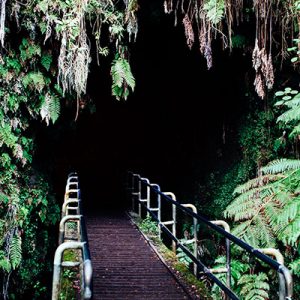 Breathtakingly Beautiful: 8 Best Caves in the US