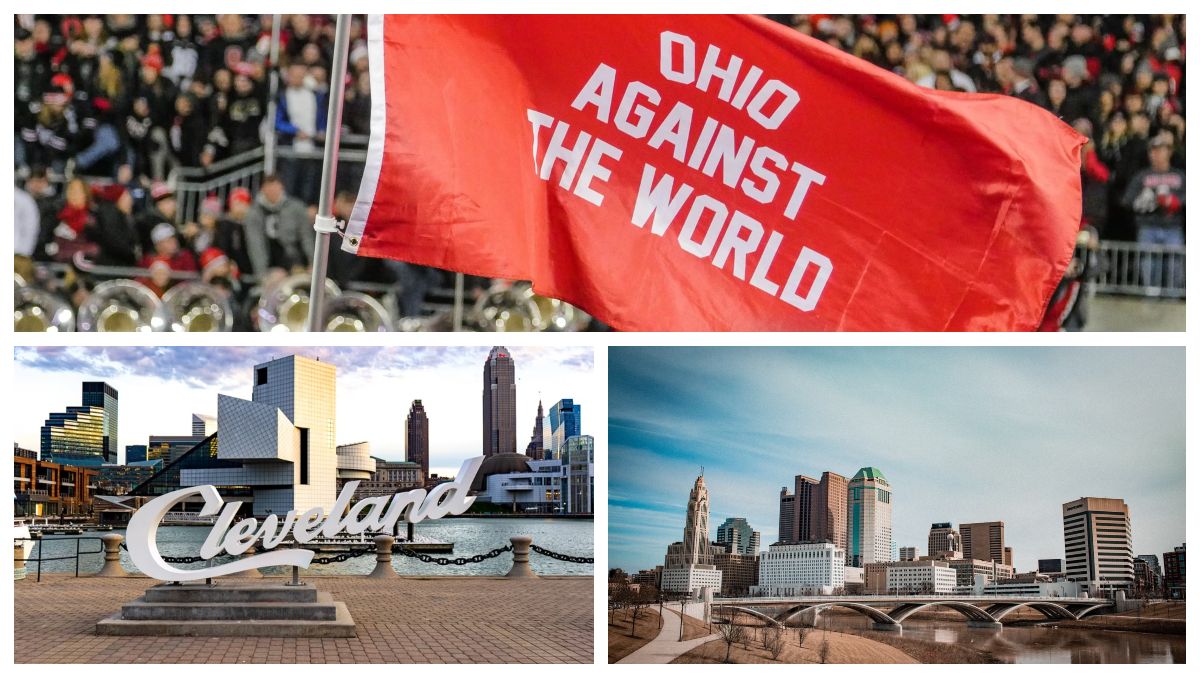 The Cleveland vs Columbus dilemma is a common dilemma. As a tourist, you’d want to maximize your time visiting places that interest you or would make the whole trip memorable.

If you only have a day or two to visit an Ohio city, is Cleveland better than Columbus?

Or Columbus a better option than Cleveland?

In this post, I’ll highlight what each area offers, so you can make an informed decision and layout your itinerary more appropriate to your travel requirements.

Comparing Attractions of Cleveland vs Columbus

If you’re visiting Ohio for sightseeing, your decision would fall largely on the attractions Cleveland and Columbus have to offer. Here are the main ones (note that I have a separate section for kid-friendly attractions below):

Cleveland has a ton of green spaces to explore – the city boasts 18 reservation parks with 100+ hiking trails, ziplines and other outdoor activities. You can choose one or more from Cleveland Metroparks.

If your group of travelers is not in the mood for hiking, Hinckley Reservation is perfect for kayaking, swimming, boating, fishing and other water sports.

Edgewater Beach is the closest to downtown Cleveland. There are walking paths, a playground, and a lifeguard on duty during the summer months if you’re going to swim in Lake Erie.

Also in Cleveland, Cuyahoga Valley National Park is where you’ll find the 65-foot Brandywine Falls. Cuyahoga River offers kayaking opportunities, while other activities like bald eagle watching and rock climbing are open for everyone.

In Columbus, if you love visiting gardens or natural woodland, visit Inniswood Metro Gardens, Columbus Commons (the largest park in downtown Columbus), the Park of Roses, or OSU Chadwick Arboretum and Learning Gardens.

If you wish to go off the beaten path, there’s Hayden Falls and the underground caverns of Olentangy Indian Caverns.

The “ninja course” at Glacier Ridge Metro Park is an interesting playground. Adults who wish to climb can go rock climbing at Scioto Audubon Metro Park.

You don’t even have to spend to enjoy the outdoors.

There’s a public beach at Alum Creek State Park if you’re itching for some fun in the sun.

Or you can kayak or canoe at Columbus and Franklin County Metro Parks.

The best way to mingle with locals, embrace the culture, and get lost in the city’s unique charm is to visit certain districts and neighborhoods.

Both Cleveland and Columbus have a handful of these, but the following areas are the most popular.

Coventry Village is a commercial village that brings together over 100 local makers and gives them a space to sell their stuff.

Tremont (on the West Side of Cleveland) is a historical neighborhood with awesome architectural buildings, memorable cuisine, and a lively art scene.

Another one is Shake Square, built in the late 1920s and continues to be a shopping center mostly for the residents of Shaker Heights

If you want to chill or meet up with friends, the German Village is a historic site with brick streets, gorgeous architecture, small book stores, book stores and restaurants.

RELATED 15 American Landmarks that Define the US

Kid-friendly Activities at Cleveland vs Columbus

If you’re visiting Ohio with kids and you want to include some kid-friendly stops into your itinerary, check which city has the activities you and your kids would be interested in.

Columbus takes the cake for being a kid-friendly city.

The Wilds, a safari experience where you can be face to face with cheetahs, white rhinos, and more, is located about 80 miles east of Columbus. It is also run by Columbus Zoo.

When it comes to dining, certain parts of Cleveland, like East 4th street, West 6th street corridor downtown, W.25th, Detroit Road in Lakewood, the Cleveland Heights and the Coventry area all had a resurgence of restaurants recently.

You won’t run out of places to find good food.

For outdoor shopping in Cleveland, check out Crocker Park in Westlake, or Legacy Village in Beachwood. Indoor shopping (malls and shops) is often found in areas where Cleveland restaurants are lined. West Side Market (set in a historical building built in 1912) is another must-see spot for Cleveland shopping.

Columbus has a thriving arts scene and because the city is home to one of the largest college campuses in the country, you’ll find many venues catered to the young and hip crowd.

Like any major city, Columbus Ohio has become a food destination with diverse culinary thanks to immigrant small business owners from Vietnam, Mexico, Somalia, and the Philippines that share their food with the locals.

North Market Downtown has a similar approach with over 30 food stalls at a time, but it also serves as a shopping destination as well.

It is more like the Columbus icon, Easton Town Center, where over 250 stores and restaurants are housed.

If you’re interested in something specific, check out these FAQs below:

Even if Cleveland and Columbus are just 2 hours of drive away, they don’t share the exact same weather and climate. Lake Erie and latitude are two major factors that dictate Ohio weather.

In the winter, northerly winds drag in Arctic air from Canada, into Lake Erie, then brings the infamous wind chills all over Cleveland and northern Ohio. Columbus gets more stable weather thanks to its location.

Cleveland vs Columbus: What’s YOUR pick?

If you have 5 days or more available for your trip, break it down and visit both Cleveland and Columbus. If not, here’s my recommendations:

Both Ohio cities have their unique charms, interesting attractions, and highlights, but the answer depends entirely on what you’re looking for. I hope this post helped you.

If you’re looking for more information about Ohio, check out the best Lake Erie beaches in Ohio and the must-see Ohio waterfalls.

Top 5 Aviation Museums in the US to Visit

6 Waterfalls Near Kansas City Worth Checking Out

Don’t Miss These 6 Sedona Wineries on Your Next Trip

20 Best Places to See Fall Colors in the US